The call for nominations for invited talks for HALG 2018 is open till 12th of December! See below.

To nominate, please email  halg2018.nominations@gmail.com  the following information:
1. Basic details: speaker name + topic (for survey talk) or paper's title, authors, conference/arxiv + preferable speaker (for paper talk).
2. Brief justification: Focus on the benefits to the audience, e.g., quality of results, importance/relevance of topic, clarity of talk, speaker's presentation skills. Pay attention to potentially non-obvious information, e.g., the topic might seem out of scope, or the material seems inadequate for one talk.

All nominations will be reviewed by the Program Committee (PC) to select speakers that will be invited to the conference.

Please keep in mind that the conference does not provide financial support for the speakers.

The Bratislava Declaration of Young Researchers is something I was involved in recently. Its preparation was inspired by Slovak Presidency of the EU and it was presented on today's informal Council of Ministers responsible for competitiveness (Research). I hope this will have some follow up, no rx as current trend in funding research in EU is in my opinion (and not only my as this declaration shows) going in the wrong direction.
Recently with Marcin Pilipczuk, Micha? Pilipczuk and Erik Jan van Leeuwen we were able to prove that the Steiner Tree problem has a polynomial kernel on unweighted planar graphs. So far this was one of few problems where such kernel seemed possible, but existing tools (e.g., healing theory of bidimensionality) were unable to deliver it. Essentially, we were able to prove the following theorem.

be a planar Steiner tree instance, and let

be the cost of optimum tree connecting terminals

in the unweighted graph

. One can in polynomial time find a set

of edges of size polynomial in

Figure 1. The process of cutting open the graph

Let us shortly discuss the idea of the proof of this theorem. The most non-trivial part of it is the pineapple decomposition. In order to give you a glimpse on this decomposition we will first reduce the problem to the simpler case where all terminals lie on one designated face. Such planar graph with one designated face will be called a brick and this designated face will be called the perimeter of the brick. Without loss of generality we assume that the perimeter is the outer (infinite) face of the plane drawing of the brick. The first step of our reduction is to find 2-approxiate Steiner tree

. Next, we cut the plane open along tree

(see Figure 1) to obtain the graph

. Now all terminals lie on one face in

whereas the optimal Steiner tree in

is cut into smaller trees in

be a brick. Then one can find in polynomial time a subgraph

. The main challenge is to devise an appropriate way to decompose

into subbricks, so that their ``measure' decreases. Here we use the perimeter of a brick as a potential that measures the progress of the algorithm. and how it partitions the brick

Intuitively, we would want to do the following. Let

be a tree in

that connects a subset of the vertices on the perimeter of

into a number of smaller bricks

, formed by the finite faces of

(see Figure 2). We recurse on bricks

. We can prove that this decomposition yields a polynomial bound on

if (i) all bricks

have multiplicatively smaller perimeter than

In this approach, there are two clear issues that need to be solved. The first issue is that we need an algorithm to decide whether there is a tree

for which the induced set of subbricks satisfies conditions (i) and (ii). We design a dynamic programming algorithm that either correctly decides that no such tree exists, or finds a set of subbricks of

that satisfies condition (i) and (ii). In the latter case, we can recurse on each of those subbricks. Figure 3. An optimal Steiner tree that connects a set of vertices on the perimeter of

and that consists of two small trees

that are connected by a long path

; note that both bricks neighbouring

may have perimeter very close to

The second issue is that there might be no trees

for which the induced set of subbricks satisfies conditions (i) and (ii). In this case, optimal Steiner trees, which are a natural candidate for such partitioning trees

, behave in a specific way. For example, consider the tree of Figure 3, which consists of two small trees

that lie on opposite sides of the brick

and that are connected through a shortest path

(of length slightly less than

). Then both faces of

may have perimeter almost equal to that (in particular) hides the small trees

in the ring between

, and a subsequent decomposition of

To address this second issue, we propose a completely different decomposition - the pineapple decomposition. Intuitively, we find a cycle

of length linear in

that lies close to

, such that all vertices of degree three or more of any optimal Steiner tree are hidden in the ring between

(see Figure 4). We then decompose the ring between

into a number of smaller bricks. We recursively apply Theorem 2 to these bricks, and return the result of these recursive calls together with a set of shortest paths inside

between any pair of vertices on

. The main technical difficulty is to prove that such circle

exists. If you would like to learn more on how it works, you can still attend our talk during the coming FOCS in Philadelphia on Sunday at 11:05, or have look into the full version of the paper on arXiv. Additionally to the above result, the paper contains similar results for planar Steiner forest problem, planar edge multiway cut, as well as some generalization of these results to weighted graphs.

Last week we organized Workshop on Kernelization (WorKer 2013) in Warsaw. The programmee included

We hope it was fun! Below you can see some pictures. 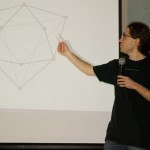 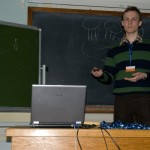 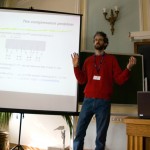 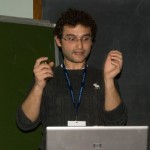 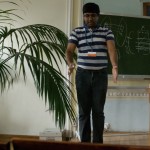 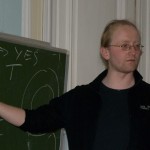 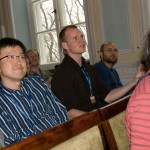 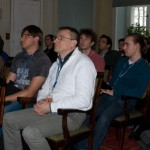 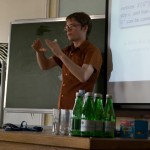 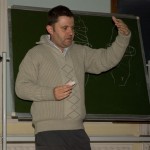 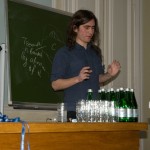 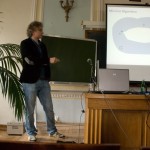 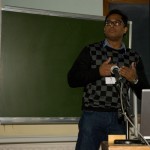 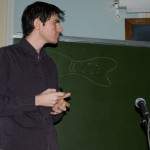